Deanna passed away a year ago, on June 14, 2018. She did not give us a chance to say goodbye. I am still in awe of the sheer personal courage that such a decision entailed, for we are culturally primed to make death bearable by imagining emotional farewells and the comfort and reassurance of the people left behind. I recall a crucial scene in the iconic Gone with the Wind in which the death of a key character, Melanie, shows just this kind of elaborate leave-taking. We can all think of countless examples of this kind: the obligation to visit the sick or dying remains strong. As it should.

Yet Deanna had chosen to slip gently into that good night, and none of us had been the wiser. While the shock and sadness of her passing will take time to dissipate, I have realized that Deanna’s instincts in this regard were right after all, as she so often was. For, over this past year, as my research assistant Casey and I have been collecting and compiling materials for this issue, it is as though Deanna had never left at all! Whether it is in the replay of her distinctive voice in Inés Vogelfang’s marvelous audio “Shiva,” the capture of her favorite words in Kristin Sztyk’s recollections, the imprint of Deanna’s documentary vision in the excerpts we have linked to, the photographs from events she nurtured and ran at the New School, even in the elaborate notes we made to ourselves, Deanna’s presence looms large, and her place is secure in our hearts.

In thinking of how best to capture in this brief space a sense of the totality of a person, let alone a personality as rich and complex as Deanna’s, it has struck me that there was a seamlessness to the many roles she inhabited, so that seemingly incompatible aspects were harmoniously interlinked: teacher and/as friend, colleague and confidante, critic and creator, and I could go on. A personal tribute seems fitting in lieu of a more formal “introduction” because I believe Deanna would have preferred the more direct approach. Kind and self-effacing as she was, she made a lasting impression on all who were privileged to know her.

Although Deanna and I were colleagues, in a kind of culture in which the boundaries between the professional and the personal are strictly maintained, we enjoyed a rare kind of understanding and friendship, both inside and outside of our office confines. I cherish now each occasion in which we were able to enjoy a free-ranging conversation: a night out for “Shakespeare in the Park”; our established ritual to celebrate the completion of a semester with dinner, drinks, and yes, a bit of gossip when we would giggle like schoolgirls; her visits to my house for a meal; and of course, our random chats in her office or in the hallway when we quickly exchanged some latest piece of news about ourselves. If there are two types of people in the world, those who see the glass as half-empty and those who see it as half-full, we complemented each other, for Deanna could whisk me out of a self-flagellating mood through words of encouragement and appreciation. I recall her enthusing about a short piece I’d written for a school event or an honor I’d received with a generous, “You’re brilliant, my friend!” Not true, but she made it sound real and her support was genuine.

We talked endlessly about my migration project, with Deanna invariably providing me with examples of books, articles, films, and other references that might be useful. She once got me a publisher’s copy of a book even before it was out! We had an idea to co-design and co-teach a course on Hanif Kureishi’s work, given that it combined so many media genres and related to topics we were both passionate about.

Ultimately, what I will most remember about Deanna is joy: feeling joy, spreading joy, exuding joy. Bitterness or acrimony were alien to her; she did not march to that piper’s tune. The dazzling smile to which so many of us felt drawn is perhaps her greatest legacy of warmth and friendship in an often cheerless world. I am glad that the first thing I see each morning as I’m heading towards my office on the sixteenth floor of our building is the space where Deanna used to sit. As I pass by her pod, I cast an involuntary glance at her empty desk, and almost see her bent over her keyboard, at work on one or other of her numerous projects. I smile to myself, imagining some pleasantry that we would have exchanged. With a lighter step (if with a still heavy heart), I walk to my own desk and settle in for the day.

My hopes in putting together this issue of Immediacy had been to assemble as much of Deanna’s work as possible in one place for it to be accessible to anyone in the future. While this has not been possible in the case of her films for obvious copyright reasons, and we were unable to access some of her early work despite our best efforts, we have provided wherever possible relevant information that can be followed up.

We struggled also to determine what might be the best way to organize this modest gateway to her achievements, not just for those who knew her, but for those who did not. Should we take a biographical or chronological approach, starting from her early years in Toronto to her mature years of life and service in New York? Or would a kaleidoscopic blending of the many facets to the person she was be more appropriate? Or should we separate out her intellectual, creative, and pedagogical roles through suggestive snapshots? Or would a creative act, involving excerpts from her films and public appearances be the best homage, as was the moving film made by the “doc studies” department for the memorial event a year ago? While all of these approaches might have been fitting ways to represent Deanna, we felt that “the eclectic mode” perhaps best summed up her instinct to cross borders, whether disciplinary, intellectual, or spatial. And so we have steered clear of categories or chronology, leaving it to the reader to make their own connections.

A task that is to be left for a later time is a critical engagement with Deanna’s films, a giving back that is surely due her own work in the caring and rigorous manner that her students and friends have attested was her own modus operandi. Surely nothing would give her life’s mission a sense of completion more than for her students to one day carry forward the torch of critical and humane thinking that she herself bore. This issue dedicated to her memory embodies that hope. 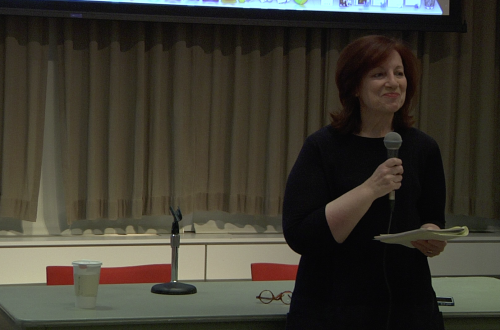 A Passionate Pursuit of Ideas